How social slaying works in Diablo 3: Reaper of Souls 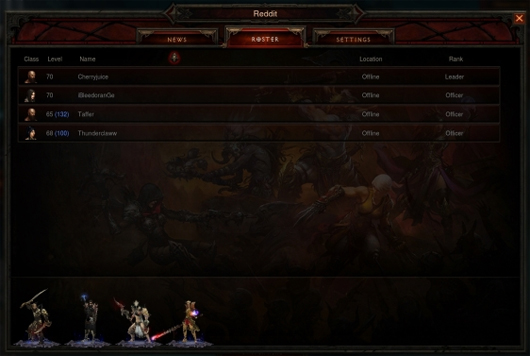 Diablo 3: Reaper of Souls will serve social slayers by giving them formal and more casual options to band together and go a-lootin’ in Blizzard’s popular role-playing game.

Clans, which are invite-only, have a 120-person maximum and were designed for smaller, more tight-knit groups of players to coordinate schedules and gameplay goals. Anyone can create or request to join a clan, but players may only be enrolled in one clan at a time.

Communities, on the other hand, are a more casual means to essentially the same end. They can be open or closed, and players can be members of multiple communities at the same time. There are also no player caps on communities, so they can be as small or as large as players see fit.

Both features are live in the ongoing Diablo 3: Reaper of Souls closed beta and will be unlocked in the full game prior to the expansion’s launch next month, on March 25. Custom tabs in the user interface of Diablo 3 will keep clan and community members up to date by displaying news, recent Legendary Item drops found by members (which you can ogle from within the menu) and a dedicated chat channel for direct lines of communication. Good hunting!

Rise from your demise in this Dark Souls 2 trailer