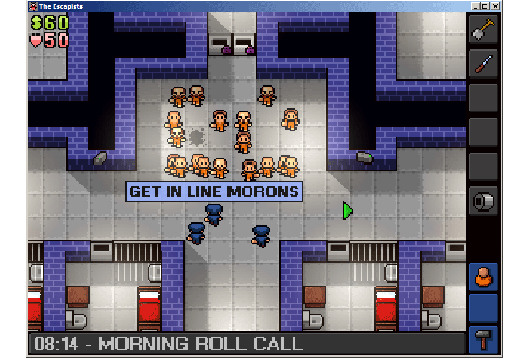 Team17, the UK outfit behind the popular Worms franchise, will publish Mouldy Toof Studios’ indie prison break-out sim for PC, The Escapists. This is the second game to be published under Team17’s third-party publishing label, the first being indie top-down stealth game Light.

In The Escapists, players assume the role of a prisoner determined to escape from confinement. Players craft items and weapons from everyday objects found around the prison while adhering to a strict schedule of activities. Inmates must avoid exposure during cell shakedowns and plan their escape without tipping off the guards.

The Escapists was successfully funded through Kickstarter back in November and passed through Steam Greenlight within a week of its submission. The Escapists is determined to tunnel out of development this summer.

Joystiq Streams: Getting surreal with Jazzpunk [Relive the stream!]