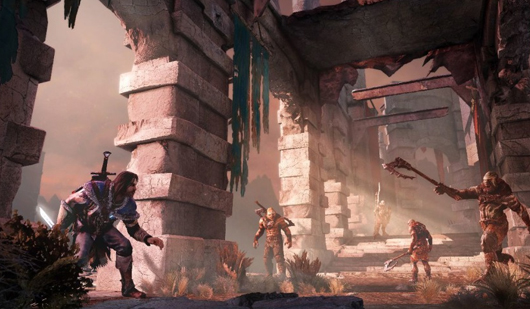 Monolith Productions is doing “whatever we can” to ensure feature parity between the Xbox 360, PS3 versions of Middle-earth: Shadow of Mordor and the Xbox One, PS4 offerings. But the developer admits this may be an impossibility and reveals the game’s core hook, the Nemesis system driving its procedurally-generated enemies, will likely lack some complexity on Xbox 360 and PS3 when the game launches this year.

“To break it down, some of the stuff we’re pretty confident will still be very similar on current gen: the core mechanics, like combat, stealth, ranged and movements; the basic control and gameplay, that should all be really solid,” Monolith Design Director Michael De Plater told IGN. “What it won’t have is the same level of depth and variety and simulation within the ‘Nemesis system.'” De Plater added that the Nemesis system is “just so huge in terms of content, calculations and AI we’ll just have to try and get as much of it in as we can.”

The Nemesis system is the mechanic driving Middle-earth: Shadow of Mordor‘s core gameplay loop. Protagonist Talion, on a mission of revenge, explores Mordor and isolates Orcs in order to extract information on Sauron’s army. This information reveals not only Orc hierarchy, but also the vulnerabilities and strengths of individual Orc commanders, each of which are procedurally-generated by the game.

We were able to go in-depth with Shadow of Mordor‘s Nemesis system last month, though admittedly all we saw was the next-gen version running on a high-end PC. Monolith was unwilling to discuss the planned Xbox 360 and PS3 versions at the time.

Joystiq Streams: Getting surreal with Jazzpunk [Relive the stream!]