Threes browser game will ensure you get absolutely no work done 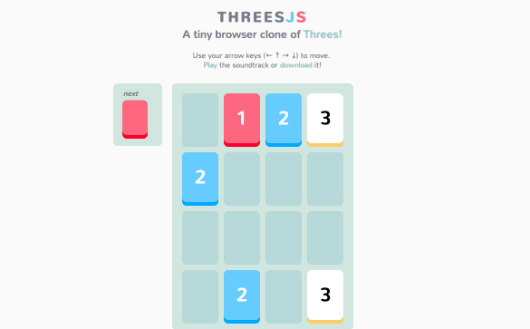 Attention hungry iOS Threes addicts and sad Android users: You, too, can play Threes all day long with the browser game, designed specifically for those who want to spend hours avoiding actual work (or those who forgot their spectacles at home). Seriously, open this game only if you’re OK with not doing anything productive the rest of the day.

You already opened it? Oh, man. We warned you.

Threes comes from artist Greg Wohlwend and designer Asher Vollmer, and it’s a brilliantly simple premise: On a four-by-four grid, slide numbers together to create larger numbers, all divisible by three. One and two make three, three and three make six, six and six make twelve, and up from there, squishing together the same, three-based numbers to achieve the high score.

The Threes browser game doesn’t include the amiable chatter and unique personalities of each number featured in the iOS version, but it has the option to play the game’s music. The big version comes from Angela Li, @angelaconstance on Twitter, and it’s been approved by Wohlwend and Vollmer.

“We’re really flattered that a fan would take the time to put Threes in the browser like this,” Wohlwend tells Joystiq. “It’s a fan-made, free game that doesn’t try to profit from our hard work on Threes. We’re currently trying our hardest to stay focused on the next update as well as on porting to Android. While the obvious feelings of ‘uh-oh, people really want to play Threes everywhere’ kind of permeate our thoughts more and more, and it’s hard to focus on what we need to because of that, we feel this homage was done with the right kind of heart.”