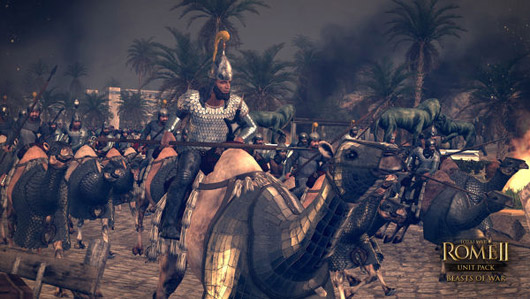 The recent release of the Beasts of War downloadable content pack for Total War: Rome 2 has ignited a backlash among series fans, who accuse developer Creative Assembly of deliberately withholding finished content from the retail version of the game in order to release it later as paid DLC.

Players claim that the Camel Cataphract units featured in the Beasts of War pack were originally seen in a Creative Assembly-produced Let’s Play video prior to Total War: Rome 2‘s release. The video additionally outed the existence of the Mercenary Naked Swords unit, which wouldn’t be seen until the later release of the game’s Caesar in Gaul paid DLC.

Players posted these allegations at Creative Assembly’s Facebook page and on the official Total War forums. Further complaints arose when forum mods allegedly moved related threads to the Rants and Raves sub-forum, which is only publicly viewable by registered users.

“At the time of this video’s recording, these units were not finished in terms of art, gameplay or design and as a marketing team we should have double-checked the likelihood of them making it into the final game,” Bartholomew said. “Obviously we don’t want to feature content that won’t be in the game intentionally, especially when it would otherwise be pointless, as in this case where there was a huge variety of other great units to show off. That’s our basic human error and I apologize for letting that through.”

Bartholomew additionally detailed company-wide plans to carefully check pre-release content prior to publication, in order to avoid future conflict. “[The units] weren’t working pre-launch in the sense that they were finished, being largely placeholder and subject to change,” he said. “However, I completely appreciate that this sounds like a ‘get out’ on a technicality to a fan feeling aggrieved by this, so again I do apologize for not thoroughly checking enough that all content in that video was absolutely ready for public viewing and understanding. We’ve put checks in place now that should prevent that in the future.”

Threes browser game will ensure you get absolutely no work done

Rise from your demise in this Dark Souls 2 trailer