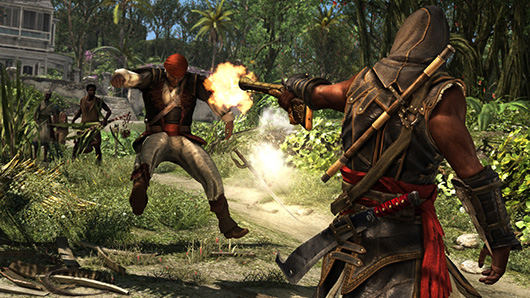 Today marks the standalone debut of , a tale set adjacent to the events of , and starring Edward Kenway’s first mate, Adewale.

Freedom Cry sees Adewale shipwrecked on Haiti, without supplies or a ship full of surly pirates backing his every murderous action. Instead, Adewale must form his own crew while aiding the local slave population in their fight against oppression at the hands of wealthy European landowners. As you’d expect from an Assassin’s Creed entry, Adewale spends most of Freedom Cry avoiding a civilized discussion of human rights in the colonial era in favor of acrobatic assassinations and periodic brutal machete killings.

While the original incarnation of Freedom Cry required players to own a copy of Assassin’s Creed 4, this new version does not. Simply visit the PlayStation Network Store, hand over $15 and Adewale’s quest is yours. A PC version of Freedom Cry will feature the same price tag, though that game won’t debut until February 25.