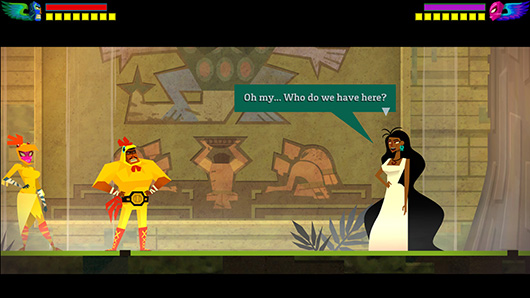 There’s a very tempting collection on sale over at Humble Bundle right now. Humble Indie Bundle 11 tosses together four indie treasures: Guacamelee, Dust: An Elysian Tail, Giana Sisters: Twisted Dreams and The Swapper. Pay more than the average and you’ll also get Antichamber and Monaco: What’s Yours Is Mine.

Guacamelee is Drinkbox Studios’ lucha libre-inspired action platformer, while Dust: An Elysian Tail is Dean Dodrill’s beautifully-animated action role-playing game. Giana Sisters, from Black Forest Games, is a difficult 2D platformer, The Swapper is a lauded puzzle game built around a cloning device, Antichamber is a psychological first-person exploration game and Monaco is all about pulling off heists with up to three other buddies.

This bundle will be live for the next two weeks, and the Humble Bundle folks assure us new games will be added before the sale period ends. In order to secure those additional games, you’ll need to pay beyond the average – which is hovering around $4 as of right now.